The Helen G. and Allan D. Cruickshank Research Awards are given to support projects dealing with wild birds in Florida. Proposals submitted for research awards should be directed at improving knowledge of Florida birds and should propose work to be done in Florida. Students (undergraduate to PhD) are especially encouraged to apply; post-doctoral level scientists and non-profit organizations or their representatives may also be considered for funding. The maximum amount awarded each year typically falls in the range of $2000-2500; multiple awards for smaller grants are occasionally provided.

Proposal Due Date: February 15 of each year.

(1) an updated CV of the applicant with current contact information;

(2) a research proposal of up to 8 double-spaced pages (4 single-spaced; excluding references, figures, and tables);

(3) a 1-page research budget showing total project costs, and what portion of the total this award will cover; and

(4) a timeline indicating when work will be completed.

Research proposals must be well-written and contain an Introduction/Background section with Literature Review; a clear statement of Research Objectives, Study Design, proposed Methods and Materials that include information on the study area/species, and a short Synthesis and Significance section at the end emphasizing why funding this project will enhance knowledge or conservation of Florida birds.

All application materials should be put into a single PDF file, in order, and emailed to the Committee Chair with CRUICKSHANK PROPOSAL in the title line.

Applications should be strong in one or more of these focal areas:

(2) conservation biology (new understanding of how populations, species, or communities (patterns, processes) are affected by humans such that this understanding could lead to designing better protection of avian biodiversity)

If you are interested in participating in this program, please email: Beth Forysnotifying your intent to start the process.

Allan Dudley Cruickshank was a nationally known ornithologist who has been described as “a modern Audubon with a camera.” Cruickshank, a lecturer and teacher, was on the staff of the National Audubon Society for 37 years. He wrote and illustrated many magazine articles and a number of books on ornithology, some with the aid of his wife, Helen.

He was for many years the official photographer of the National Audubon Society, and his pictures appeared in more than 175 books and won awards in numerous exhibitions.

His interest began at the age of 10. He was on his way to West 23rd Street in New York City to get a newspaper for his mother when he spotted a strange bird—clearly not a pigeon, English sparrow or starling—perched low on a willow tree near Eighth Avenue.

As the boy inched closer, the bird remained calmly on its perch and studied him. The bird, the boy was to learn, was a screech owl, as uncommon in the area as willow trees now are.

Excited by the experience, the boy started going uptown to look for birds in Central Park. And when his family moved to the Bronx, then largely rural, he was ecstatic over the specimens he found in woodlands, gardens, and orchards. 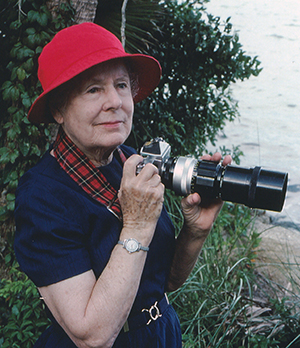 It has been said of Mr. Cruickshank that he had “flown, climbed (and fallen), crawled and ridden into almost every corner of North America to study wildlife in its native habitat.

He was born in St. Thomas, the Virgin Islands, on Aug. 29, 1907, to a Scottish father and a French mother. He came to this country at the age of two and lived mostly in and around New York City.

Mr. Cruickshank, who attended New York University, was former president of the Linnaean Society of New York, and a member of the Wilson Ornithological Club, the Nature Conservancy, the Wilderness Society and the Izaak Walton League, among others.

With his wife Helen he received the John Burroughs Medal for 1949 for “Flight Into Sunshine.” He also received several other awards. 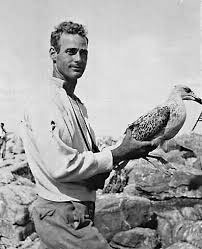